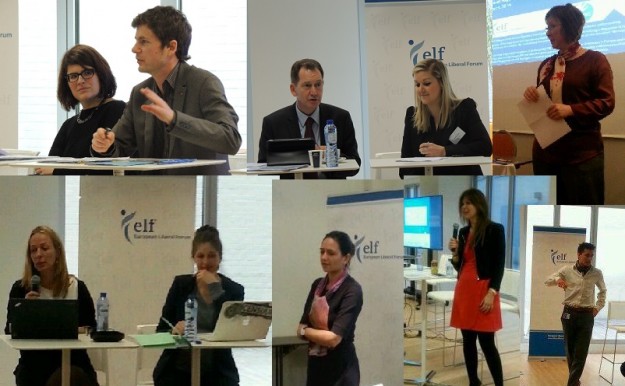 In the past two days (25 and 26 of March) about 30 members of LYMEC (over a third of them candidates to the upcoming European elections) gathered in Brussels to discuss the role of the European Union in the protection of civil rights and individual freedoms. This was an event organised by the European Liberal Forum asbl (ELF) with the support of LYMEC and the Friedrich Naumann Stiftung with the assistance of Microsoft and ALDE Party and co-funded by the European Parliament.

The event kicked off Tuesday evening with the welcome from Jeroen Diepemaat (LYMEC President), followed by the opening speeches by Susanne Hartig (Executive Director of the European Liberal Forum) and Julie Cantalou (European Affairs Manager at the Friedrich Naumann Stiftung).

The participants then engaged in a debate on the meaning of the European Union and of its significance in the protection of civil liberties. The debate was followed by a dinner, where participants had the opportunity to get to know each otehr in an informal context, while tasting Belgian cuisine.

Wednesday the event was hosted by Microsoft, at their Executive Briefing Center in the ‘European neighbourhood’. After the welcome address by Sebastian Gerlach (Senior Manager External Affairs at Microsoft EMEA) Hans Hofkens (Yammer platform) presented the opportunities that professional social networks present to organisations, facilitating better cooperation and easier work.

The next session was led by Sissel Kvist (LYMEC Campaigns Officer) and focused on secularism and sexual minorities in Europe. Evelyne Paradis (Executive Director at ILGA Europe) presented the victories and the challenges that the LGBTI movement is nowadays facing in our continent and in the EU. Pierre-Arnaud Perrouty (Executive Director of the European Humanist Federation) spoke about the lack of representation of non-believers in the European institutions, contrasting with the proviledges that confessional organisations have enjoyed. In the debate that followed the presentations, speakers and participants had the opportunity to deepen these issues. Among the problems focused, was the recurring strategy of conservative forces of using false accusations, a strategy that was recently seen in the Estrela Report on SRHR and the Lunacek Report on LGBTI rights.

Sir Graham Watson MEP, ALDE Party President, addressed LYMEC’s participants in the last morning session, moderated by Vedrana Gujic (LYMEC Vice-President). In the 38 years of existence of the Party (celebrated in that same day, precisely) the Liberals have been in the forefront of the defense of civil liberties, championing on the subjects that were focused during this seminar.

Jeroen Diepemaat and Vedrana Gujic then led the participants into a role play exercise, in which participants had to argue in favour and against LGBTI rights and secular values, allowing them to better understand how conservative political forces think and training them on how to better answer them.

In the afternoon, privacy and data protection were the topics under discussion. Cornelia Kutterer (Microsoft Director for EU Institutional Relations) and Janneke Sloetjes (EDRi / Bits of Freedom) engaged into a debate moderated by Ed Sanderson (LYMEC Press Officer) about how much can we trust companies and states? The EU legislation and practice were explained to the participants, which had the ooportunity to confront also the speakers with questions on issues such as how to guarantee the privacy of our data or how business models of given companies influence their stances on data protection or net neutrality.

Ed Sanderson led the participants in a second role play debate on privacy, where participants had again the opportunity to put into practice the contents received in the previous session.

Below, our participants with Sir Graham Watson MEP at Microsoft EBC Brussels.