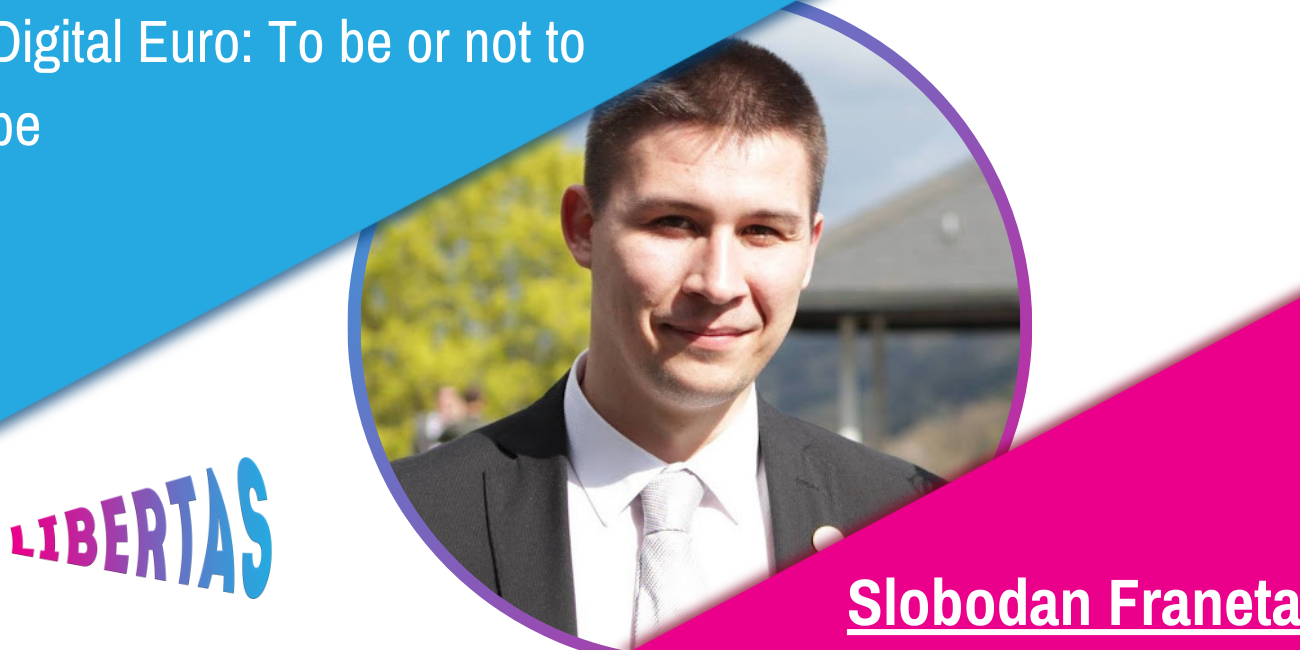 Digital euro: To be or not to be

Article written by Slobodan Franeta, member of the editorial team of Libertas

The European Union considers options to join the race for establishing a virtual currency. It will be a long and exhausting journey.

Technological development drives social development. Add to these global catastrophes, such as a pandemic, and very soon, you will get societies that base their functioning entirely on digital platforms. Therefore, it should not be surprising that discussions about digital currencies are currently in the spotlight. Many leading economies are thinking of transforming their monetary systems and introducing virtual money to ease doing business across  regions and following global trends. Not only leading economies but emerging ones are also trying to jump into the race. Take, for instance, the Bahamas, a country in the Caribbean, which is the first country to launch a Central Bank Digital Currency (CBDC) in 2020.

For those who are not familiar with the term yet, CBDC is a digital equivalent to the banknotes issued by the central authority, most commonly the central bank. Thus, possessing digital money would be the same as having paper money, except that it would be more convenient since we use technology ceaselessly and it is more eco-friendly. To make it even simpler, imagine going to your favourite bar and instead of juggling with paper notes and coins, you pay your bills using the mobile phone or any other electronic device.  This may not sound like a revolutionary idea: after all, digital wallets have existed for a while. However, in this case, money held in the form of the CBDC will be equal to the existing deposit at the central bank, thus limiting risks and providing certain security and stability.

In October last year, the European Central Bank (ECB) published a report on the digital euro. Although the report does not offer a precise design of the digital euro that can be discussed here, except it is not a crypto asset nor stablecoin, it states that the idea is to provide a more competitive, innovative, and resilient payment system in Europe.[i] But, alas, the process of creating such a payment system will be a long and exhausting journey - as is always the case with bureaucratic machinery. According to Christine Lagarde[ii], the European Central Bank president, the process will be divided into phases. If approved, by the Governing Council of the ECB sometime during 2021, the first phase will be experimental. The experimental phase would last between six and twelve months, after which the council would decide if they should continue developing and ultimately implementing the digital euro. The digital euro could thus become a reality in four years or more, according to Christine Lagarde.

Meanwhile, China has already issued its digital yuan, which is used domestically as one potential replacement for cash. It is planned to be tested with foreign visitors during the 2022 Winter Olympics in Beijing. By July this year, the Federal Reserve Bank of Boston and MIT will present prototypes and research results for a digital dollar. Currently, the only setback in the U.S. could be caused by commercial banks and other financial firms that fear it could afflict their profits. It is evident that the world is heading toward another, inevitable, financial revolution Hence, the ECB should accelerate its effort to introduce the digital euro if the European Union intends to remain relevant in the global and digitalised economic race.

Besides the CBDC’s ability to lower transaction costs, improve  states’ financial framework[SF1] s, and foster investments and innovations, why could it be important for individual citizens?

Firstly, in theory, it could lead toward more financial inclusion of the so-called ‘unbanked’ population. Data from 2017 suggests that at least 35 million EU citizens, or close to 8% of the entire EU population, remain outside of the banking system[iii]. This number is generally higher among less developed economies of the bloc. Thus, incorporating digital euro could boost financial inclusion within these countries, allowing easier access to digital payments for the unbanked population, as mentioned earlier. Additionally, it could accelerate the adoption of the euro among member states of the European Union, which may further boost economic growth and digital innovation on the continent.

Furthermore, the digital euro implementation will bring a more secure, faster, and reliable payment mechanism. It could reduce counterfeiting and money laundering, but also it could eliminate a need for an intermediary in retail payments alongside lower transaction costs. The ECB’s study from 2012 on 13 economies indicated that the costs of retail payment mechanisms are considerable. On average, they amount to almost 1% of GDP for the sample of participating EU countries[iv]. However, there are no up-to-date data on the matter since, in the European Commission’s Retail Payments Strategy on the EU from 2020, it is stated that cash remains the means used for a majority of retail payments in the EU[v]. Therefore, it can be assumed that the costs remained substantial for all parties.

Ashift to the digital euro could reduce the environmental impacts caused by printing banknotes and minting coins. A study from the ECB reports that the production of 3 billion banknotes in 2003 had similar effects on the environment as those of each European citizen driving a car for one kilometre. In addition, many stakeholders are involved in the production process of the euro. It is estimated that at the moment, 19 national central banks, 12 printing works, six paper mills, and 22 raw material suppliers are involved in the euro production. Around 6,000 tonnes of cotton combers, 15% originating from a sustainable source, were used to print banknotes in 2018. It would be almost impossible to expect a complete transition to cashless functioning at any time soon. However, the gradual transition to the digital euro could significantly, among all other benefits, positively impact the environment and the general carbon footprint of the euro.

The digital euro bears some concerns with it. The most significant is privacy. The idea of digital money is often identified with cryptocurrencies. Cryptocurrencies, however, operate on technology that allows for complete decentralisation, and it provides some levels of anonymity to its users. With digital money issued by the central bank, this will not be easy to achieve, so user privacy concerns naturally arise. In the ECB’s report on the digital euro, it is stated: “Anonymity may have to be ruled out, not only because of legal obligations related to money laundering and terrorist financing but also in order to limit the scope of users of the digital euro when necessary – for example to exclude some non-euro area users and prevent excessive capital flows or to avoid excessive use of the digital euro as a form of investment”. Those who value privacy will most likely consider using the digital euro. Although it is too early to talk about the entire system and whether it will be subject to rigid control and monitoring, the issue of privacy will be crucial for the success of the project. In many states, where democracy is still fragile, this can create a set of new problems that can further jeopardise individual liberties. Therefore, it would be significant for the entire project if the possibility of anonymity currently offered by the use of cash could be achieved. It will undoubtedly be a topic that will be much discussed throughout the process. Some future debates could offer us more insight into the overall idea of the central bank leaders regarding this problem.

The idea of digitising the euro is undoubtedly excellent and desirable. However, the design of the digital euro itself will have a significant impact on the success of the entire project and its future implications for European society. People in the ECB are aware of that, so it is one of the reasons why they want to implement the entire project gradually. The question is whether it  is possible to start thinking earlier about introducing the digital euro and how much the delay will cost the European Union.

Finally, another crucial question is how much poor implementation could cost the European Union and whether it could undermine already damaged confidence in the euro as a mutual currency. The forthcoming years will provide answers to these and many other questions. It remains for the public to be patient until then.

[v] The European Commission (2020). Retail Payments Strategy for the EU. Communication from the Commission to the European Parliament, the Council, the European Economic and Social Committee and the Committee of the Regions. Retrieved from: https://ec.europa.eu/transparency/regdoc/rep/1/2020/EN/COM-2020-592-F1-EN-MAIN-PART-1.PDF

[SF1]Personal note: Using real-time data could enhance the government's planning of the financial framework instead of waiting for the data to be collected; Lowering costs in processing information, etc.

About the Author: Slobodan Franeta (ME) is an individual member of the European Liberal Youth (LYMEC) and is currently serving as an editorial board member of the Libertas magazine. He holds a master’s degree in international economics. Slobodan is particularly interested in decentralised finance, sharing economy, behavioural science, and regulations.