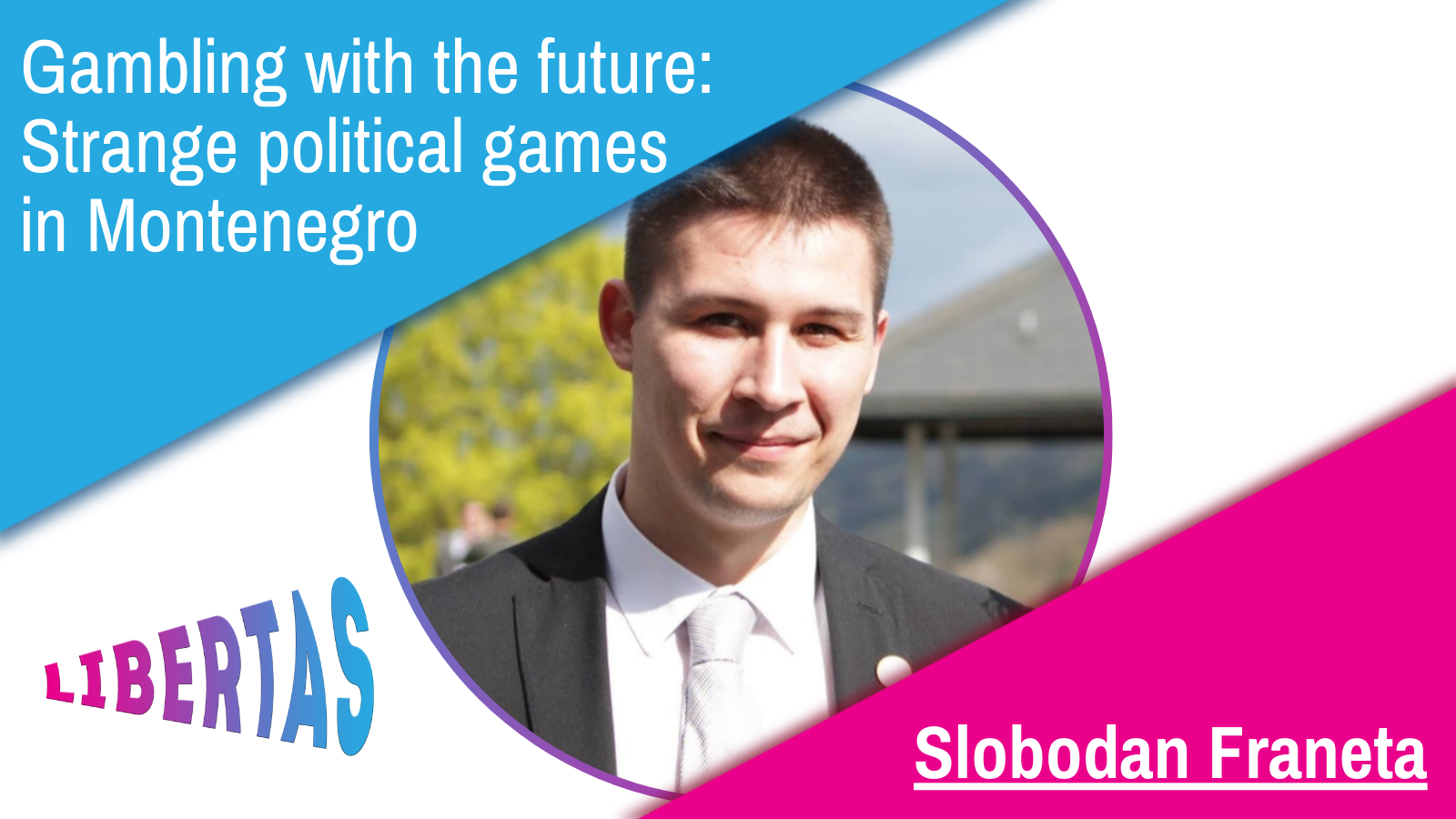 Gambling with the future: Strange political games in Montenegro

Written by Slobodan Franeta, member of the Editorial team

Something is strange with the state of Montenegrin politics. A so-called technocratic government is beginning to more closely resemble a theocratic one. The ruling coalition parties are threatening to overthrow the government almost daily. But, at the same time, they do not miss the occasion to position their acolytes in the same government. On the other hand, the opposition parties act as if they had not been in command for almost three decades and that the current state of society is not their legacy.

At the same time, there are games for the throne, rising unemployment, a decline in purchasing power, and skyrocketing prices of essential commodities. Moreover, except during the tourist season, many private firms operate under strict pandemic restrictions and government interventions in market processes, leading to further economic deterioration.  As a result, there is much scepticism about the future. And rightly so.

Challenges of the political transition

2020's parliamentary elections pushed the Democratic Party of Socialists (DPS) into opposition for the first time in nearly three decades of ruling with its junior coalition partners. The new ruling coalition based its partnership on a common foundation (according to different analysts - and the only one) that is the unwillingness to collaborate with the DPS and its leader Milo Djukanovic. It was an opportunity for new generations of politicians to accelerate the strengthening of democratic institutions and Montenegro's accession to the European Union. However, it quickly became apparent that ideological, but above all, differences in party interests between the new coalition members would become a significant barrier for any meaningful progression.

The technocratic government was presented as a way to rein in the ambitions of politicians, especially in the domain of foreign policy and its future direction. However, there is no doubt that the technocratic government was also an excuse to limit the influence of conservative and pro-Serbian politicians in the new government. Moreover, it was a chance for certain parties within the new coalition to better position themselves for the next parliamentary elections. There is clear evidence of this in the state of distribution of critical positions. For instance, Aleksa Becic, the leader of Democratic Montenegro, was elected Speaker of Parliament. At the same time, the prime minister's mandate was entrusted to Zdravko Krivokapic, a relatively unknown political figure presented as a non-partisan leader. Catapulting these figures into the public eye ensures that they will have a much greater platform and body of support in future elections, thus shaping the future of Montenegrin politics for years to come.

However, what is most interesting about this so-called ‘expert’ government is that Dritan Abazovic, a career politician and president of the United Reform Action, was given the position of deputy prime minister in charge of security, which is not his area of expertise. At the same time, the heads of the Democratic Front, who have been opposition leaders for three decades, have been excluded from government even though their Democratic Front has 18 seats within the grander For the Future of Montenegro coalition in the Parliament of Montenegro. In other words, far from reining in political ambitions, this government will serve simply to promote the interests of certain parties, while completely ignoring the will of a significant number of voters.

The distribution, as mentioned earlier, of critical positions, along with an active pandemic and turbulence in resolving sensitive issues between the Serbian Orthodox Church and the state, has created tremendous pressure on the government from the outset. The pressure intensified as the work of the government became increasingly non-transparent and unprincipled, especially with regard to specific parts of society. Reckless and often ridiculous statements by members of the government or their closest associates also contributed to it. Still, of course, the background to these pressures is not the desire for the overall welfare of Montenegrins but rather the usual contests for power between political entities and better positioning for the likely snap elections.

The role of the Serbian Orthodox Church in political events in the last two years has been significant. All the more so because during 2020, the Serbian Orthodox Church mobilised a substantial number of its believers in, as they declared, a call to defend their holy places from a law that was supposed, among other things, to regulate some controversial points in relations between religious communities and states. There is no doubt that the SOC's pressure on public opinion, especially Orthodox believers, impacted the outcome of the parliamentary elections. Furthermore, the uppermost priority of the new ruling coalition was to repeal the law, which was adopted in December 2019 after much tension and the arrest of the opposition in the Montenegrin parliament. Simply put, religion continues to play a significant role in Montenegrin politics.

The Serbian Orthodox Church's influence in state affairs is the subject of many debates between the government and the opposition. The government's close relationship with SOC representatives shook the foundations of the civic state. It is primarily because the Serbian Orthodox Church members have been given a privileged position regarding strict epidemiological measures. There are almost no events when these measures are not violated, including government representatives who regularly participate in breaking them. At the same time, representatives of the same government urge compliance with the prescribed measures and make it significantly more difficult for the private sector to operate.

The events of September 2021 surrounding the enthronement of Joanikije Mićović as the Metropolitan bishop in the Cetinje diocese provoked intense and violent protests and contributed to further segregation. The government risked the safety of many of its citizens by further stoking religious sentiments. Additionally, in a country where a significant number of people have died from Covid-19, members of the government participate in religious gatherings where measures are not respected and tend to attach political labels to those who criticise such behaviour.

Although Montenegro has managed to change its government democratically, much remains to be done to move society forward. If politicians remain prisoners of the past, they cannot lead the country into a bright future. Therefore, the question arises, which route should Montenegro choose?

A path to take

Strengthening democratic institutions and eliminating corruption from the private-public space must be the highest priority. The lack of strong and independent democratic institutions will always be an opportunity for certain groups to grasp a more privileged position compared to others. On the other hand, corruption leads to a corrupt and nepotistic economy, which further crumbles economic institutions, primarily the Montenegrin market. Therefore, a healthy economy should be based on sound institutions and pro-market thinking, which is currently sorely lacking.

The post-socialist transition has created a closed system where private business success depends on connections with the ruling parties and their chiefs. Montenegrins should discard such a practice because it hampers progress and does more harm than good in the long run. Also, in such a system, there are winners and losers. In defence of their crony wealth, the former will always attempt to manipulate the emotions of the latter, so no one should be surprised by the current societal tensions.

A better future for the country lies in the hands of politicians who must learn to cooperate rather than clash. Much more than plain words will be necessary for the country to become more competitive globally and liberated from the current captivity of the ideas from the dark past. It means that compromises have to become an integral part of the communication between leaders of all relevant political parties. There are a lot of disputes and tensions that must be resolved if there is a genuine interest in political integration and better economic cooperation with neighbouring countries. For some politicians, it will be a painful process to cut ties with nationalism and populism, but it has to be done for the sake of the future. Otherwise, as Professor Robert Skidelsky from the University of Warwick noted: "Bad economics leads to bad politics, and vice versa." Montenegrins, and their neighbours throughout the Balkan region, still remember what bad politics can do to generations of people.

Slobodan Franeta is an individual member of the European Liberal Youth (LYMEC) and is currently serving as an editorial board member of the Libertas magazine. He holds a master's degree in international economics. Slobodan is particularly interested in decentralised finance, sharing economy, behavioural science, and regulations.