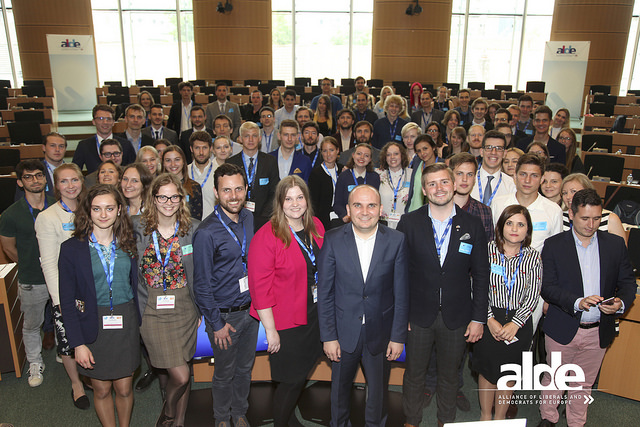 We, the young liberals and democrats, have insofar enjoyed a European continent open to travel and trade, as well as to studying, working and living wherever opportunities are best. Binding our economies and societies together has guaranteed peace, secured the European leadership in the world and furthered the rights of the individual. Young people need to be the guarantors of the values of human rights, democracy and transparency that set the foundation for European cooperation. At the face of disagreement on small scale, the EU debate has to roll back to its core values and the four freedoms.

We young liberals and democrats think the EU needs to take a courageous position on how to reform the labour market, where entrepreneurship is encouraged and technological advances are considered an opportunity. We think that the EU should make sure there is no room for exploitation on the labour market. We think the EU should also make sure there is no breach of legal contracts within the labour market. The digital transformation of the economy is the heritage of our generation, it is the outcome of technological breakthroughs that open new opportunities, and it is up to us to seize them to the fullest. There is no changing the path of development of the market, rather we young liberals and democrats need to accommodate and create flexibility at the face of change, including improvement of conditions for start ups and easing the transition from obsolete jobs to new ones.

According to us young liberals and democrats, now is the time to tackle fake news and cyber propaganda, coming from all directions, with the goal to increase transparency and citizens’ decision-making powers. In this regard, we young liberals and democrats actively promote and defend press freedom, and press for institutions that assess that every freedom is accompanied by requirements regarding ethics. The young generation sees the need for ensuring education in independence of information and the universal respect of ethics, and the role of Social Media in spreading false information should not be underestimated as well.

Populism, rhetorics, getting the message out to citizens and youth in leadership

We, the young generation will advocate for a new fact-oriented rhetoric in the fight against populism, with a focus on the democratic credentials and the aim to reach the general citizen. We call on the EU institutions to outline a roadmap to encourage and assist member states in setting up programmes to improve critical thinking skills in an online context in order to counter disingenuous content. The EU, as a democratic union, is a value in its own and a method for regional decision-making. Upholding credibility of the institutions is therefore of utmost importance.  Young people are not only the future EU leaders but are also the leaders of today, so the EU should invest more in strengthening structured dialogue on all levels of government: local, national and international.

These information challenges, along with terrorism, stress the need for increased security cooperation and cyber security at home. Longstanding partners are changing their position towards the EU and these changed circumstances create the basis for deepened defence cooperation, starting with military procurement and enhanced intelligence sharing and increased military cooperation with the EU neighbourhood policy countries. For that reason and in order to strengthen the defence cooperation it would be convenient to have a common asylum system, as well as a proper European border control agency. We the young liberals and democrats believe in safeguarding the privacy and integrity of European citizens and standing up against any attacks on internet freedom and civil liberties.

We young liberals and democrats believe in fair trade and in a priority for green and sustainable choices as well as a long-term view on equal opportunities to entrepreneurship and trade globally. When populists promote protectionism, we the young liberals and democrats want to see an open, trading Europe. We call on the EU to continue to negotiate new bilateral and multilateral trade agreements to stimulate economic cooperation. We believe the EU must be at the forefront of green growth in all sectors and adopt regulations that regard the long-term consequences of our choices including a specific, comprehensive plan for decarbonising the European energy mix. We young liberals and democrats demand openness of negotiations of trade agreements and ask decisionmakers to communicate better as citizens have shown a lack of trust in the agreement processes. Free and fair rules-based trade agreements, guided by the basic rules in the EU treaties should always be the basis for agreements. Human rights, labour and environmental standards need to be guaranteed in the trade agreements also in the future. Trade agreements guarantee the market competition and reduce protectionism, while at the same time also cementing universal values and peace.

This statement was drafted, debated and approved during the ALDE Summer Academy Innovation and Efficiency: Building the Europe that Citizens Dream of held in Brussels on June 28-30, 2017. It reflects the young people’s hopes for the future of the EU they would like to live in.