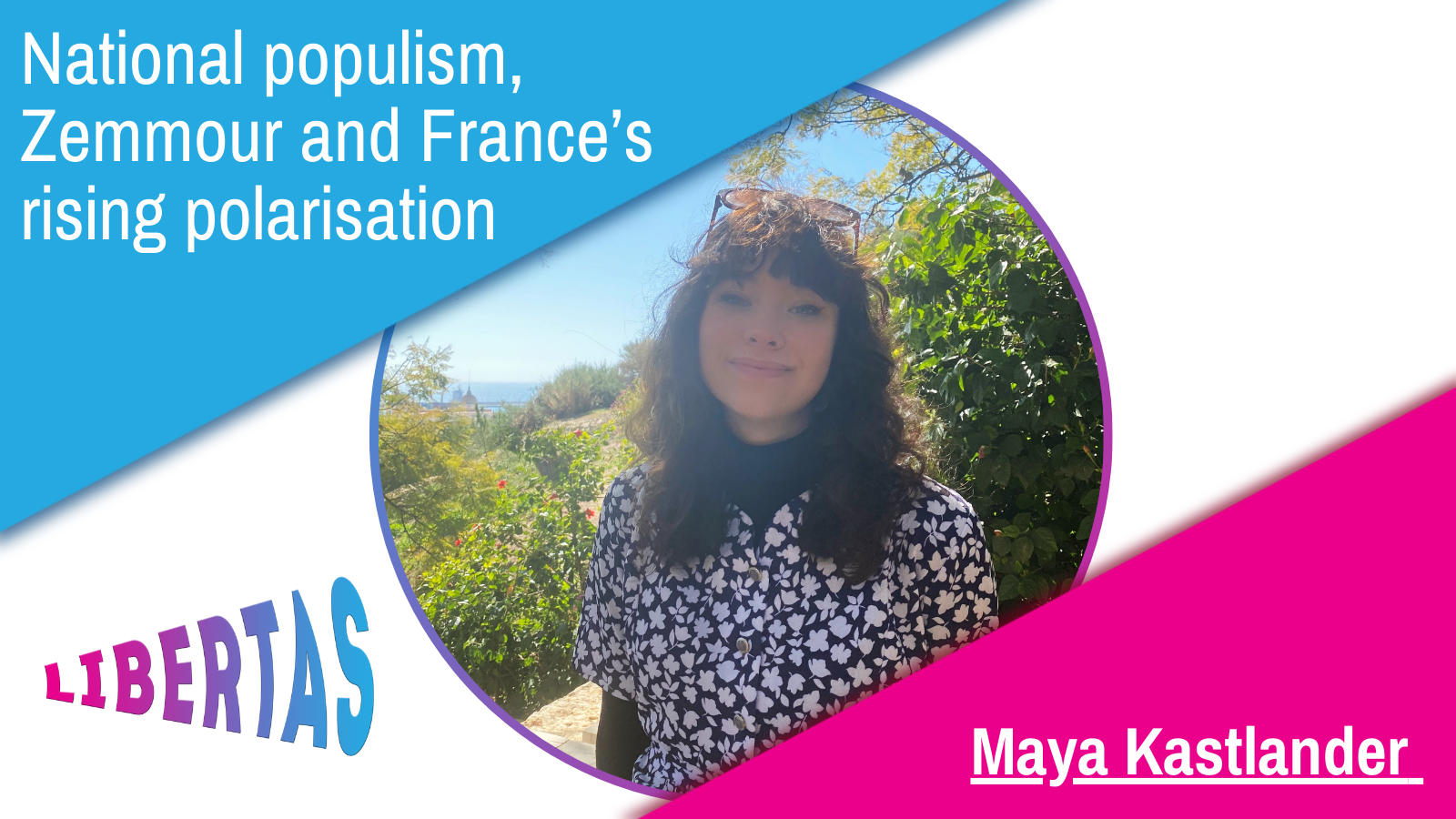 Nostalgia is worth gold in today's political landscape. Europe has the past decades seen an increase in populist and nationalistic parties and movements, a political tendency driven towards and dependent on the distrust of state institutions and politicians, the villainization of “the others” and the glorification of the national narrative. We in the liberal community often speak of this development as a threat to our democratic systems, but why do so many voters gravitate towards these ideas? We can address  this question by further narrowing down the perspective, asking ourselves: how do populist values manifest themselves in France’s political landscape of today, notably with the presence of far-right populist presidential candidate Éric Zemmour?

First and foremost, when dealing with a term as broad as an “-ism” of political theory, we must go back to the basics. Etymologically, the term derives from ancient Rome and the Latin word “populus”, meaning “the people”. The definition of populism varies with different historical perspectives and scholars and is interpreted differently depending on which part of the world we are dealing with. Populism is also a phenomenon that overlaps the disciplines of political science,sociology, economics and history amongst others, adding to the inherent vagueness of the term that has resulted in some researchers’ unwillingness to utilise it. However, the contemporary and public notion of the term has today become nearly equivalent with demagogy: scapegoating, agitating the mob towards political leaders and encouraging aggression against minorities. Populists can also be found all across the political spectrum, but when it comes to notorious parties such as for example AfD in Germany, Vox in Spain, PiS in Poland and Éric Zemmour’s Reconquête in France, we are dealing with so-called modern populism and, more specifically, national populism: the joint of populist rhetorics with nationalistic values and narratives.

Because we humans have a gnarly tendency to romanticise  the past and demand quick fixes to complex issues:  populist messages are diligently designed to speak to these sentiments and affect us on a personal level. Moreover, these tendencies are historically accentuated in the presence of charming, intriguing and eloquently talented figures who take us back to the good old days: a term I’ve met several times when talking to people during my time living here in France. Some paint the saga of a grand nation à la 1789 where liberté, egalité and fraternité ruled, where fine culture was blooming and where France was “for the French”. This nation is described to have been either demolished or, more moderately put, negatively affected by everything from immigration and free trade to leftists and decadence; all of which far-right presidential candidate Éric Zemmour has sworn to save France from. This 63-year-old journalist and columnist for the right-oriented Parisian paper Le Figaro has effectively turned French politics on its head: convicted of incitement to racial hatred following a history of exceptionally controversial statements (for example claiming that immigrant minors are “thieves, murderers and rapists”, defending the Nazi-collaborating Vichyregime of Philippe Pétain and arguing that LGBT+ individuals and ethnic minorities are a threat to the white, heterosexual male) he is a full-fledged provocateur who knows how to make a scene.

Most importantly, Zemmour is a populist. The per definition populist idea of the everyday people needing to stand up against the ruling elite and/or the targeted group is reoccurring in Zemmour’s rhetoric, not least in a video premiered last November to announce his 2022 French presidential election campaign. In this recording we see Zemmour at his desk in front of bookshelves, reading monotonously from his paper script into a vintage-looking microphone. This plays an important symbolic role as a reference to the great General de Gaulle’s 18th June appeal. This speech, viewed by some as the most important in French history, took place in 1940 following the Nazi Germany invasion and the “fall of France”. With this historical context, the message from Zemmour’s part seems given: the country is under attack and its citizens need to stand up to the malicious “others”,  a defence in which he wants to take the lead. The video also includes the fundamental figureheads of french nationalistic storytelling such as Jeanne d’Arc, Chateaubriand, Rosseau, de Gaulle and Jean Moulin, a tool to make viewers look back on the past with a rose-coloured pair of lenses. By putting forward and placing them in drastic contrast to images of violence and shootings together with videos of Muslims and other ethnic minorities he wants to convey a chronology of deep historical decline. It’s also no coincidence that Zemmours’ party name “Reconquête” is a reference to the mediaeval Christian crusades that violently drove away Muslim people from the Iberian peninsula.

The widespread polarisation, as well as distrust and hate towards ethnic and religious minorities, is a painful truth in France today. This is also something that benefits populist and xenophobic narratives like those of Éric Zemmour, as well as contributing to the normalisation of xenophobia in society in general. To begin to understand a national issue it’s always crucial to take a look at the cultural, and mental contexts we’re dealing with. The unanimous French identity and its symbols are deeply rooted in society, so much that patriotism and cultural values on a general level seem to be something almost all people (no matter class belonging or region) can gather around. But this apparent unity, enforced strongly by the state and its institutions, also has a backside: in a country where discussions about race and religion are taboo in public society, is there really space for discussions about issues facing “non-conforming” people? The French universalist and secular model that favours the collective interest and history over the individual, by claiming the same universal rights for everyone, certainly goes well with the “French” identity, but with a higher cultural diversity than ever, this stance gets more difficult in reality, leading to what some religious individuals describe as a form of pressure to limit the expression of their religion in public. In the last years, however, the debate has seen an uprise in voices demanding an open discussion about race and cultural difference as a way of fighting against the increase of discriminatory attitudes and polarisation, for example French history professor and author of “The Black Condition” Pap Ndiaye and Sarah Mazouz, author of “Race”.

And while Éric Zemmour is far from being the first politician in France to spread racism and ultranationalism in the mainstream general debate, it’s important to keep in mind that far from everyone shares his views. Most people I’ve talked to express some kind of frustration but definitely wouldn’t go so far as to blame a whole group, nor to adopt the declinist rhetorics of modern-day populism. My eminent history and geography professor Mr Kévin Ragot epitomised this latter stance, saying that “[the] idea of France and Europe being in decline because of foreigners and ‘wokeness’ coming to fragilize the society ‘as it has always been’ /…/ is a faulty idea of the French past”, adding that “France has always been a melting pot of numerous minorities: [for example] Italian, Spanish and Portuguese people have inhabited the land all along the 19th century” and that “the France that the declinists are missing so greatly has never existed”.

The wave of polarisation is a reality we see all around Europe, and France is no exception. It’s also at the same time a breeding ground and a consequence of populism, a vicious circle dismantling the trust in official institutions as well as worsening the situation for those Zemmour and his counterparts label as “ the others”. With the French elections coming up in April, the country is facing numerous challenges. And although incumbent president Emmanuel Macron is currently leading the polls, the developing influence of national-populist and xenophobic leaders is a trend that should concern all Europeans, especiallythose of  us engaged in fighting for open liberal democracy.

Maya Kastlander is a member of the European Liberal Youth (LYMEC) through the member organisation of the Swedish Centre Party Youth (CUF). She is currently residing in Paris, France and is particularly interested in international relations, European policy making and women’s rights.