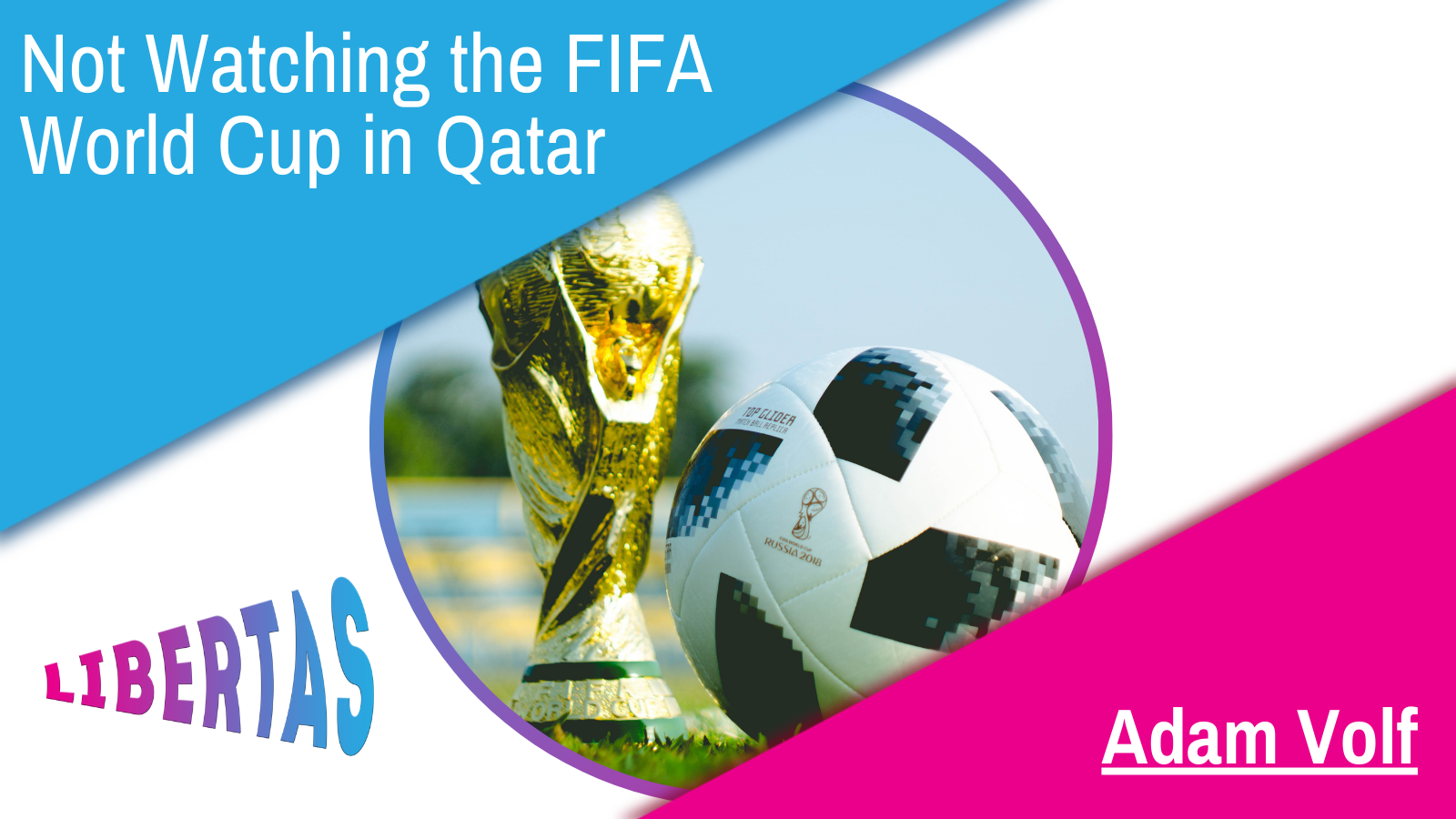 Like any football aficionado, I adore the World Cup. For Europeans, as the continent takes on increasing elements of a common identity, football remains an avenue for national self-expression - to celebrate one’s national identity with pride, irrespective of place of residence. Brussels, with its diverse population of European and non-European origin, erupts into a cascade of colour during the event, a carnival of national flags adorning every street throughout the tournament. A sport-induced euphoria that only a football World Cup can bring, and an unforgettable spectacle for any observer. Whether or not one’s country has qualified for the tournament, the World Cup is a special time.

But the 2022 World Cup is different. Despite the visible footballing success - including the inspiring advance by Morocco and landmark victories by Tunisia and Saudi Arabia - an edition occurring on the graves of 6,500 migrant workers is no World Cup. Souls who met their fate under the heat of Qatar’s relentless sun, amid the false promises of a fabulously wealthy Qatari state - which has not so much admitted the scale of the deaths, much less apologised for them. Qatar initially recognised only 37 deaths on stadium sites, recently raising this figure to ‘400 to 500’ (with the tournament now safely underway), and refused a compensation fund for bereaved families of migrant workers (Human Rights Watch). The World Cup should have been wrenched from Qatar’s hands long ago - certainly before the Guardian revealed the scale of the labourers’ death toll in February this year.

Some countries host the World Cup due to economic incentives. Profit aside, Brazil’s 2014 World Cup allowed the country to expand its aviation and tourism industries, create jobs, and promote undeveloped areas of its vast hinterland. Football World Cups may be enough to dramatically improve the circumstances of society - but Qatar, objectively, does not need the money. The 2022 World Cup is an ostentatious display designed to elevate Qatar’s world image. The profits will mean nothing to the state, nor will they benefit poor or struggling residents.

But Russia also hosted the World Cup - Yes, also scandalous. Ukrainians, in particular, have every right to feel indignant. But what many Ukrainians felt at the time of the 2018 World Cup was not - for better or worse - how the world felt about Russia at that time, and Russia had previous experience of hosting major sporting events (and infrastructure to support it). Further, the remaining investment did appear on the backs of thousands of migrant workers, lured to Russia under false pretences. To hand Russia the reins of the 2018 World Cup was, at the time, neither the scandal nor the oddity that the decision to hand the 2022 World Cup to Qatar has proven to be.

Nobody is going to care if I don’t watch the World Cup. True. Not watching the World Cup is a personal decision, perhaps resulting only in self-inconvenience. Indeed, a million people could decide simultaneously not to watch the World Cup and FIFA may not bat an eyelid. But this is part of the issue. FIFA’s brazenness in persisting with a World Cup achieved through proven corruption, despite massive opposition (including from one of the architects of this entire sham, disgraced former FIFA President Sepp Blatter), is telling. Ironically, FIFA saw itself humbled by Qatar on the eve of the tournament, as Qatar rescinded past promises to permit alcohol sales at stadiums. Is the puppet eating its master? No, the puppet becomes the master.

Your country isn’t at the World Cup, it’s easy for you not to watch it - False. Avoiding any game of any World Cup is painful (even the listless 0-0 encounters). Many - like myself - enjoy watching the Champions League every year, while supporting clubs that routinely fail to qualify (don’t worry, Sparta Prague. We love you still). The fact of not watching the World Cup is a great difficulty for me. Like others, I maintain a sense of satisfaction in Saudi Arabia toppling Argentina, Morocco overcoming Belgium, and other World Cup dramas. I take solace from Wales making an appearance at the tournament once more, and I confess to sometimes searching World Cup highlights on YouTube after the matches in Qatar conclude (who couldn’t ignore that Richarlison finishes against Serbia?). Allow me this.

But the World Cup is occurring anyway. Why not at least enjoy it? Because the statement of boycotting the World Cup accomplishes two goals. First, it downgrades the spectacle of the World Cup and nullifies the showpiece event that Qatar visibly craves. FIFA has claimed that the many human rights cases of abuse in Qatar have been significantly alleviated by the scrutiny accompanying the World Cup. Perhaps so - although only the very most optimistic would believe this was born of FIFA altruism. But Qatar ultimately got its World Cup anyway - leaving it with the comfortable assurance that its brutal treatment of migrant workers did not, ultimately, result in any real repercussions. For the world to dim its eyes to the World Cup would be to - to some extent - remove the gloss from the prize Qatar ‘earned’. It would remove the shine from the trophy awarded.
Second, and turning to FIFA, boycotting the World Cup hits FIFA squarely where FIFA doesn’t want to be hit - in the money. FIFA generally derives handsome windfalls from World Cups - the 2014 World Cup alone is reported to have generated 338 million USD profit for FIFA5. To not watch Qatar 2022 would - ultimately - impact FIFA’s revenues: and if anything might make FIFA atone for its corruption, it would be the prospect of a more meagre box office from its showpiece event.

Not watching the World Cup may not, individually, make a shred of difference. In likelihood, the only result is to sacrifice memorable evenings spent with friends and spurning an entertainment experience occurring only a finite number of times in anyone’s lifetime. Indeed, this World Cup would come with the additional pleasure of watching in a football-mad society (Poland) - an experience as enthralling as it would be enriching. No, sir - not watching the World Cup is not an enjoyable experience for anyone who enjoys football. No doubt.