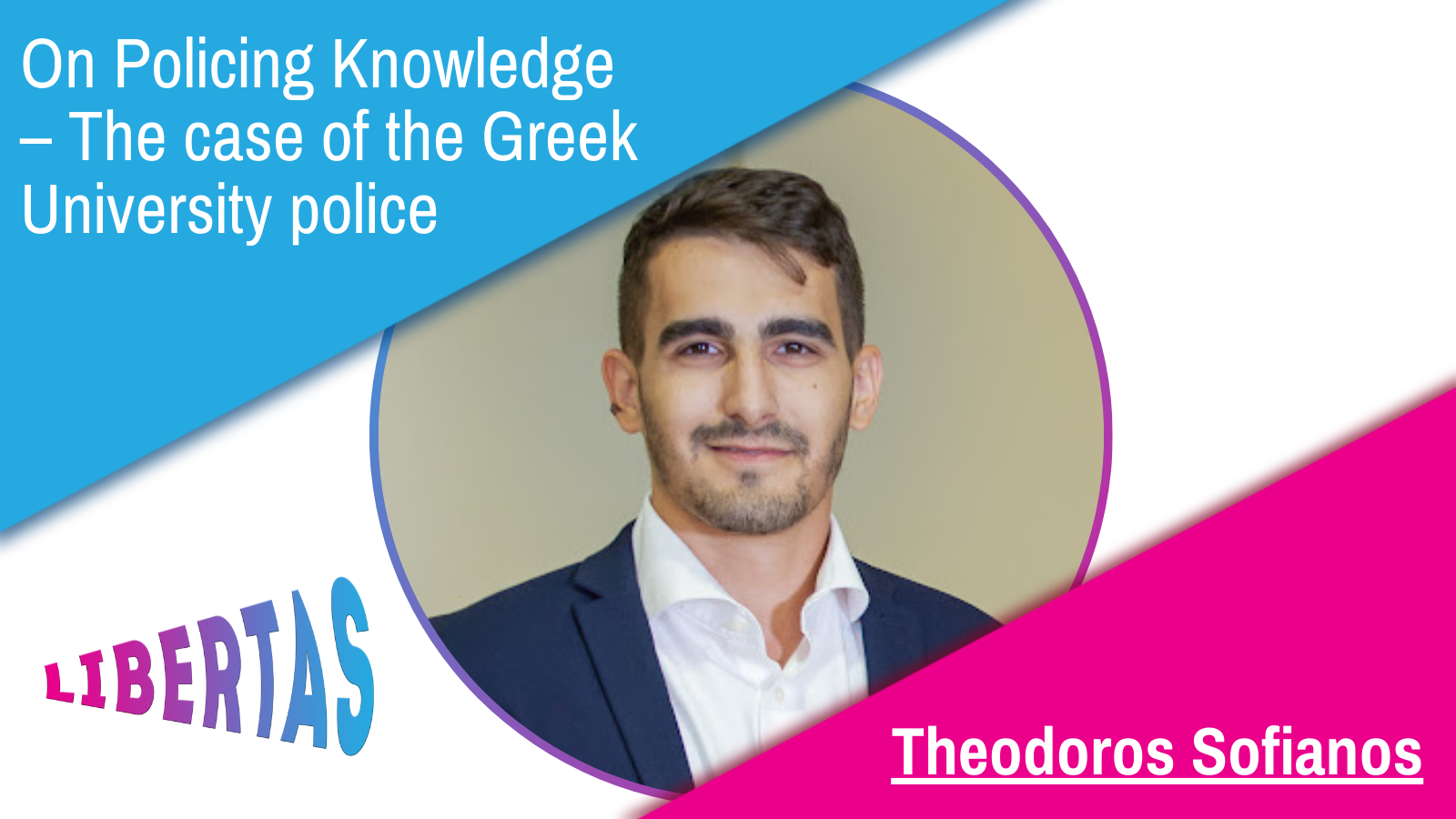 Written by Theodoros Sofianos, Member of the Libertas Editorial team

This opinion piece aims to look through a liberal lens at the heated discourse on the establishment of a police force called the "College Police" across Greek College campuses. This issue has divided public opinion and political parties and has become a concern for most students. Before we dive deeper into the issue, it is important to provide a brief introduction to the topic and highlight the arguments on both sides.

Greek academic institutions, and particularly universities, were traditionally a “no-police” zone for decades; police could not enter or raid any academic institutions’ campuses and facilities, including academic buildings, university-provided houses, etc. The reasons behind this were mainly related to the fact that the National Technical University of Athens had been raided by the Greek junta, about 50 years ago, in a protest against the regime. After democracy was reestablished, universities became symbolic spaces, where no authority could intervene. In 1982, this became more formal, as the “Academic asylum” law was passed by the Greek government. But with great power comes great responsibility, so it did not take long for individuals or groups to take advantage of this situation.

Over the past few decades, Greek university campuses have been gradually becoming more and more unsafe for students. Incidents of drug dealing, theft, rapes, attacks on students or professors, and many more, have become the “new normal”. Individuals that had nothing to do with the university, as well as a few students abused the situation to execute criminal activities. On several occasions, these incidents were framed as “political activism” or “protest against the regime”, by either the criminals, the victims, or the news, which, in turn, always escalated the situation further. In 2019, the newly elected New Democracy government canceled the previous law that had established universities as asylum spaces and granted the Greek police the legal right and the political support necessary to intervene within all university spaces.

This change has only sporadically yielded results. Even if the Greek police can now legally do their job when incidents emerge on Greek campuses, the criminality rates are still high. As a countermeasure, the New Democracy conservative Greek government has voted on, as of 2021, and is establishing, as of 2022, a new body of police; “the campus police”. This has created a big buzz, with the right-wing political space arguing that this is the only way to decrease criminality and the left-wing political space arguing that this is a violation of the students’ freedoms while slightly downplaying the issue.

Throughout the discourse, influential Greek liberals, e.g. politicians, academics, or political influencers, have reluctantly been backing the governmental side, asking for “enforcement of the law” within the Greek universities. While this is a valid argument, this is a rather short-sided approach. While most Greek liberals have until now supported the New Democracy government, with several of the former liberals (e.g. To Potami elected politicians) being integrated into the conservative government as progressive voices and with others backing the governmental plan from a distance, supporting the establishment of the “campus police” goes far away from the liberal values, to the point of intentionally, or accidentally, promoting a conservative, alt-right social agenda.

Let’s not forget that the former first liberal youth organisation of Greece that I had the chance to be an International Officer of, has moved, with the help of 12 more liberal youth organisations of LYMEC, the 3.24 Freedom of expression and Campus Police policy, part of the official LYMEC policy book. This policy condemns the establishment of campus police and calls for better and more effective “normal” policing and better allocation of government funds to education.

Moreover, it is counterintuitive for a true liberal to rely on more governmental intervention as a solution to any issue. To my mind, a liberal approach to the topic must be built on three cornerstones.

The key notion that Greek liberals should consider in this discourse, is that more authority is never the “go-to” option in liberalism. What is more, solving pressing issues with stricter repression, almost always acts as an aspirin to the system’s chronic pains, failing to improve a chronically ill system. We should be confronting our systemic issues, such as freedom of speech and universal implementation of the laws, and not hide them under the carpet, or more problems will emerge and then more freedom shall be surrendered to solve these new issues… and before you realise it, democracy is in danger.

Coming to conclusion, the purpose of this piece was to give some context to the heated discourse around the establishment of the “campus police”  in Greece and to evaluate the stance of Greek liberals. The latter find themselves in an inconvenient position, having no clear suggestion or middle ground between the dangerous narratives of a conservative government and a strong populistic opposition. To my mind, Greek liberals should be the leaders of the middle ground approach, advocating against the establishment of a special police body for Greek universities, for safer campuses by regulating the entrance to the Greek universities to students, professors, and authorised personnel and visitors, and by rethinking the role of partisan and political student associations within the universities by counter-promoting non-political ones.