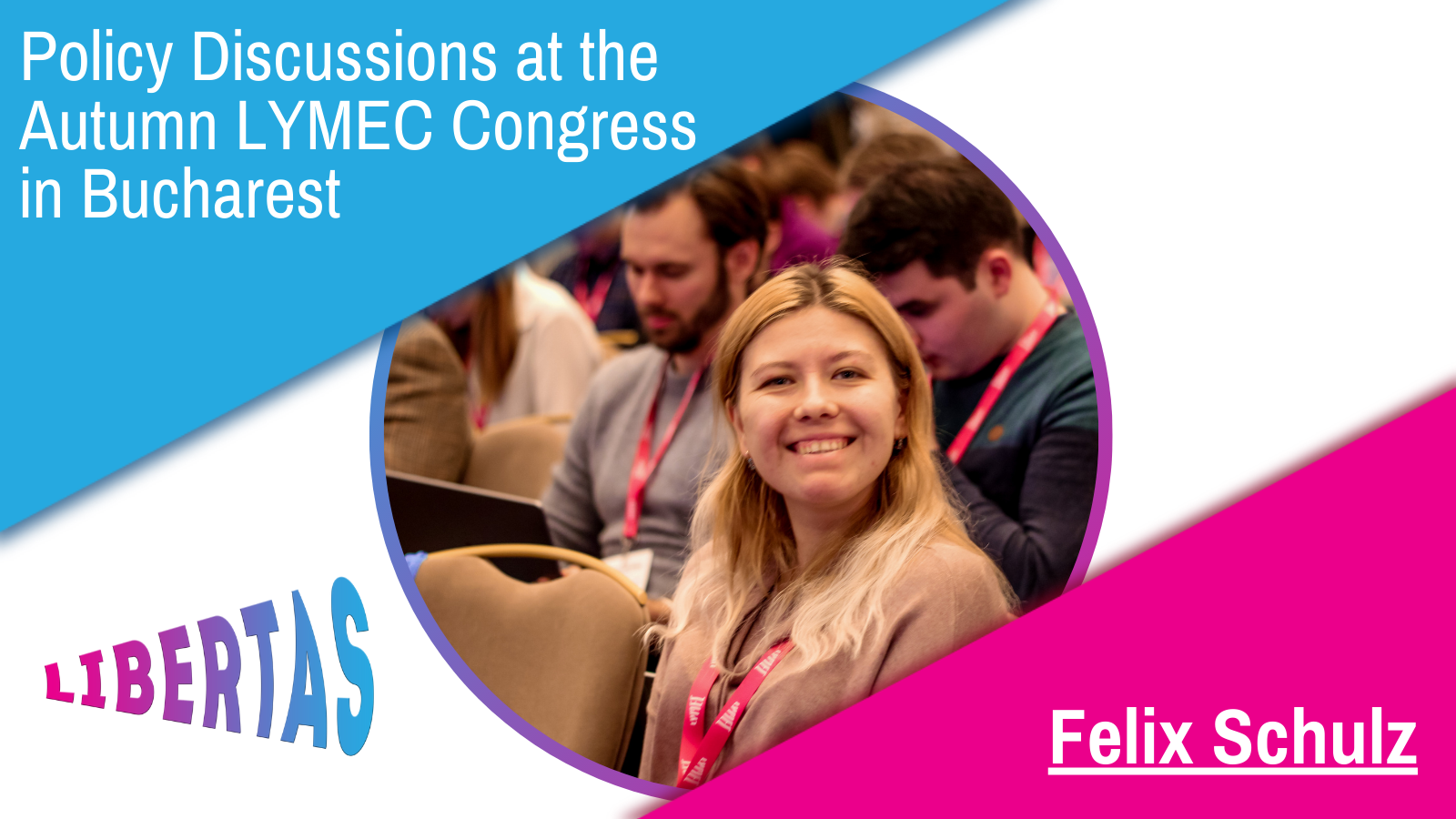 Last weekend, LYMEC held its Autumn Congress in Bucharest with around 150 delegates participating in-person. After the Spring Congress, where LYMEC elected its new board members, it was the first time since the beginning of the pandemic that delegates could debate and adopt resolutions  in-person again.

At this point, it is also important to highlight what some of our Ukrainian members were willing to do to come to Bucharest. Kateryna Onishchuk (European Youth of Ukraine), traveled 26 hours by bus from Ukraine to come to Bucharest and talk about European politics, pass resolutions, and be part of lively debates. We are honored to have such dedicated members!

As always, our president Dan-Aria Sucuri opened the Congress. In his welcome speech, he reminded everyone why: for a peaceful and prosperous Europe. We might differ in how we get there, but our liberal compass would never deviate from our core values: freedom, tolerance, individualism, responsibility, and justice.

Following up, our host Cătălin Drulă, president of the USR Party, welcomed us warmly. He reminded us that we were in a very important place. The Athenee Palace Hotel Bucharest was not only Europe's most notorious den of spies in the years leading up to World War II, but also was located right in front of Revolution Square. He said he would still remember the gunshots during the violent revolution in 1989 and the overthrow of the former regime. Having this and the Russian war against Ukraine in mind, he emphasized that politicians must fight for European values. We must never go back and abandon the fundamental importance of peace.

That is also why we passed two urgency resolutions, before discussing any other topic. The first resolution was about the missile that hit Polish soil and killed two citizens. The second one was about solidarity with Iranian women for freedom. Both resolutions passed with an overwhelming support of more than 90 percent and sent a strong signal before the policy debate.

The next day we were able to welcome Nowoczesna Youth unanimously to our liberal family at LYMEC and the current Secretary General Balint Gyevai was re-elected with a strong mandate for another term.  Furthermore, the congress elected the 10 delegates (including our Policy Officer, Laia Comerma) who are going to represent LYMEC at the next ALDE Party Congress. These individuals will be involved in the discussions resulting in the manifesto for the European elections in 2024. We will have Willemijn Krans (JOVD), Stefanía Reynisdóttir (Uppreisn), Alex Alvarez (Jovenes Ciudadanos), Oriol Marin Subira (JNC), Umberto Masi (Lithuanian Liberal Youth), Johannes Brill (Liberale Hochschulgruppen), Elsie Gisslegard (Internal Auditor), Tim Robinson (IMS delegate), Konstatsa Gyurova (Youth Movement for Rights and Freedoms). Congratulations to everyone who has been elected!

Afterwards, we finally discussed resolutions. In total 17 resolutions were passed and will be added to the LYMEC Policy Book. We are proud of the variety of topics we discussed ranging from the Russian war against Ukraine, a more liberal tax system for Europe, the phase-out of the combustion engine, human rights in international sports events, or biodiversity and ecosystems restoration. We discussed even the most controversial parts with respect and courtesy. That is indeed something we can be proud of, considering the societal climate on social media.

On Sunday many left for their home countries after a long night out in the beautiful old town of Bucharest. After all, one should not forget that this is also one of the most important parts of every LYMEC Congress. Meeting and connecting with like-minded people and having a drink together!