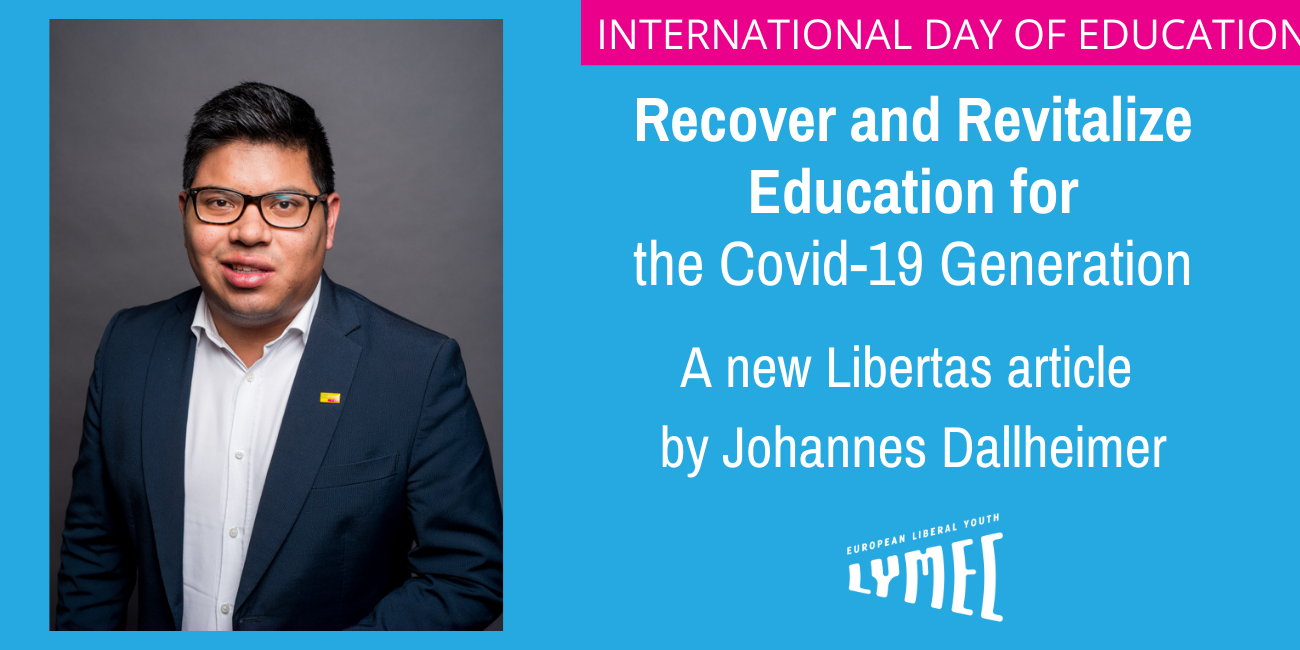 Recover and Revitalize Education for the Covid-19 Generation

Libertas article written by Johannes Dallheimer for the International Day of Education    This year's World Day of Education has a special topic - that is digitalization. Digitalization in education is not a new topic, everywhere in Europe we are thinking about it, some countries like Estonia have taken the lead, other countries like Germany are struggling to keep up. But the Covid pandemic acted as an accelerant. Due to the lockdown, millions of students had to learn from home and lessons took place digitally. In many places, the major deficiencies that policymakers had previously ignored now became apparent. As a result, education levels in different countries are drifting even further apart, leaving a deep chasm between different degrees. In addition, it is questionable to what extent the exams that were passed in the Covid crisis are a disadvantage on the labour market, since the failure of online teaching means that it must be assumed that graduates are not at the same level as their predecessors.   Here, too, a European solution could help. A European coordination of the expansion of sufficient mobile phone reception and internet connection, the collection of best practices from the EU states and an evaluation of these for all teachers, a European education cloud and the networking of the education ministers of the EU states would be a first step towards making education policy in Europe more comparable. Education policy does not have to be pushed onto the EU level; in some countries, education policy is a matter for the national level, in other countries it is decided by the federal states themselves. Coordination and a look beyond one's own national borders would help many member states to orient themselves and adopt the good proposals and avoid mistakes already made. A win-win situation for Europe!   Besides schools, however, the situation at universities has also changed fundamentally as a result of the pandemic. Online teaching for all students, no or limited opportunities to do research or use a library, no exchange programmes, no internships. Students are also the big losers of the crisis, because while teaching and exams continue to be made possible, the opportunity for a whole generation of students to discover and live out their own lives has been eliminated. Moreover, many universities were not designed to enable online teaching in the first place. The difference between a distance-learning university and a university with face-to-face teachers has been openly lived and cultivated for the past decades. Now many universities, some of which are centuries old, are no different from a business school that has always seen its students only via camera. This is also changing studies and academia a lot.   Many challenges have to be resolved at the lowest level, in the faculties and universities themselves. Then, in many countries, education policy needs to be reformed at the national level. But the EU can also provide support. Through a European education cloud, every student could access the digital transcripts and summaries created at any European university and use them as supplementary material for exams. The creation of a European Digital University (EDU) would bring together teaching, exchange and research, so that there would be a real European exchange from the first semester. And the issuing of a uniform European student card, with which many services at other universities can also be received.   Despite this terrible pandemic, it is also a return for a better and coordinated European education policy. Now is the time to act and make World Education Day a European Education Day!