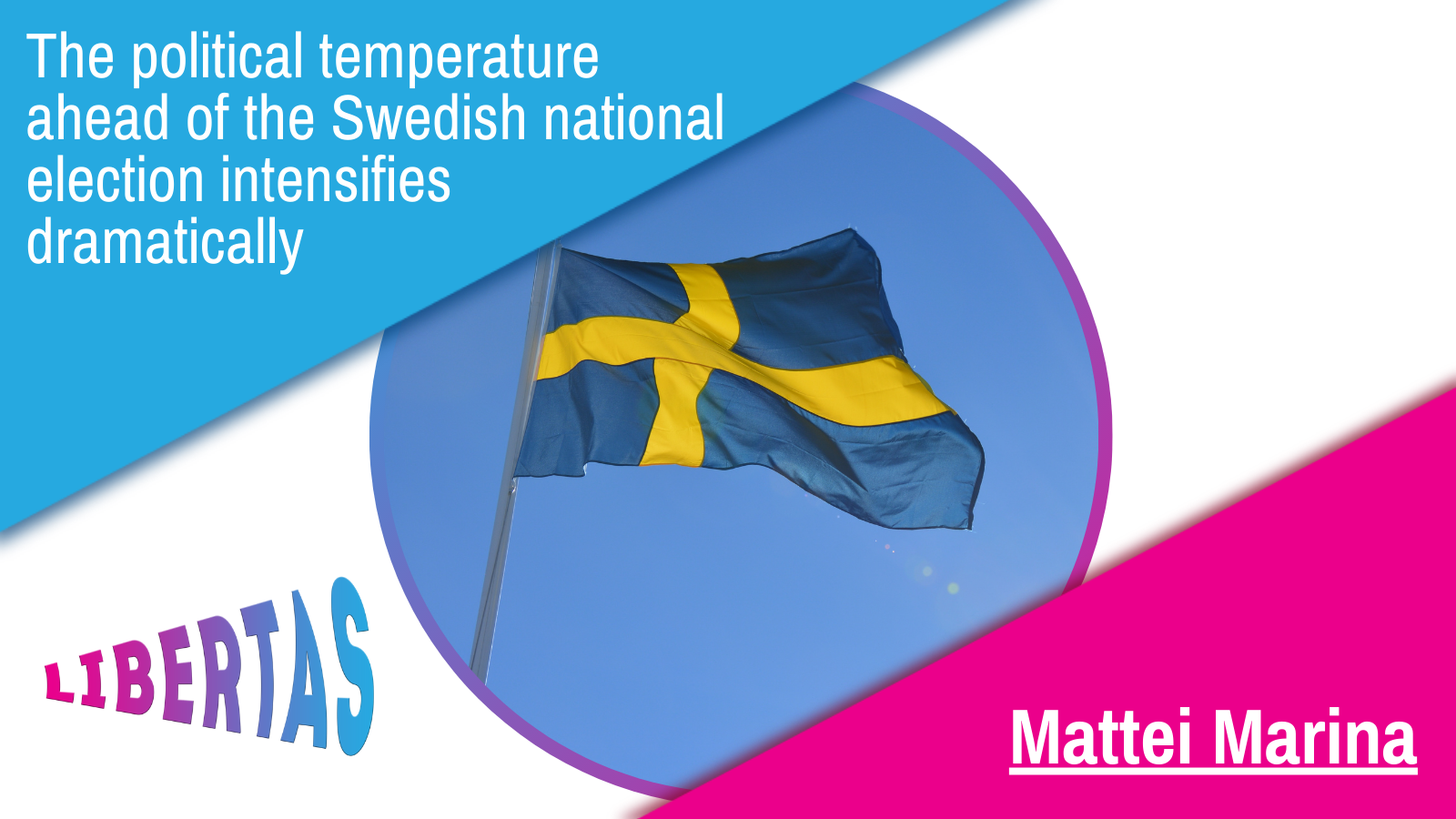 The political temperature ahead of the Swedish national election intensifies dramatically

Sweden goes to the polls on September 11th. Much like the previous election in 2018, it is unclear which of the two blocs will win. In the last years, the choice has been a red-green coalition consisting of Social Democrats and Greens, or the so-called “Alliansen” - a center-right alliance based on four liberal/conservative parties; The Liberals, Moderates, Center Party, and Christian Democrats. Since the last election, however, the political landscape has changed considerably. The right-wing nationalist Sweden Democrats are now part of the center-right government support, and the post-communist Left Party dictates the red-green coalition's policies to a greater extent.

The liberal parties (Liberals and the Center Party) had to join one of these two sides, to have a majority in the “Riksdag” (Swedish parliament), and thus be able to form a government. For these parties, it has meant either cooperating with the Left Party or the Sweden Democrats. Neither option was perfect. At the beginning of the term, The Liberals - together with the Centre Party and Left Party - supported a coalition government consisting of the Social Democrats and the Greens, the so-called January agreement. The Liberals later withdrew their support with the government crisis in March 2021. After a politically, as well as ideologically exhausting and challenging internal process, the Liberals decided to support a potential center-right government after the upcoming September elections - even if it requires support from the Sweden Democrats.

In addition, the right extremist Sweden Democrats are now about to take over the position as the largest opposition party. In my opinion that would be both frightening and dangerous for democracy. One can compare it with tendencies in other European countries where right-wing extremism is growing. Despite this, from a nordic point of view - it is rather remarkable that the party still is growing. In other Nordic countries, like Denmark and Finland, other far-right parties have had a decline in public support. From a European point of view, the rise of right-wing extremism is a trend that has again become a fact in recent years. For example, the neo-fascist Fratelli d'Italia is leading in the polls with about 24 percent just before the federal election at the end of this September.

Also during the Swedish election right rhetoric became more popular. The two Swedish member parties of the European People’s Party (EPP) - the Moderates and the Christian Democrats - have adopted some right-wing policies and rhetoric regarding immigration issues to attract voters from the far right. The model is inspired by the Danish Social Democrats, the Conservative People's Party, and to some extent the conservative liberal Venstre', who previously used right-wing rhetoric successfully in their campaigns. In Sweden, this strategy has led to the Moderates now being 3-4 percentage points below the Sweden Democrats, and the Christian Democrats being steadily around 5 percent.

Sweden is in a very uncertain political situation. A likely scenario is that the Moderates become the third largest party for the first time in decades and that the Sweden Democrats will gain so much influence that the Liberals will withdraw their support for such a government. There is also the chance that the Left Party will get ministerial posts and that the Green Party's energy policy will lead to a system collapse in Sweden. Luckily as long as the election results are not presented, we know nothing. One thing is for sure - the voters will decide the outcome.