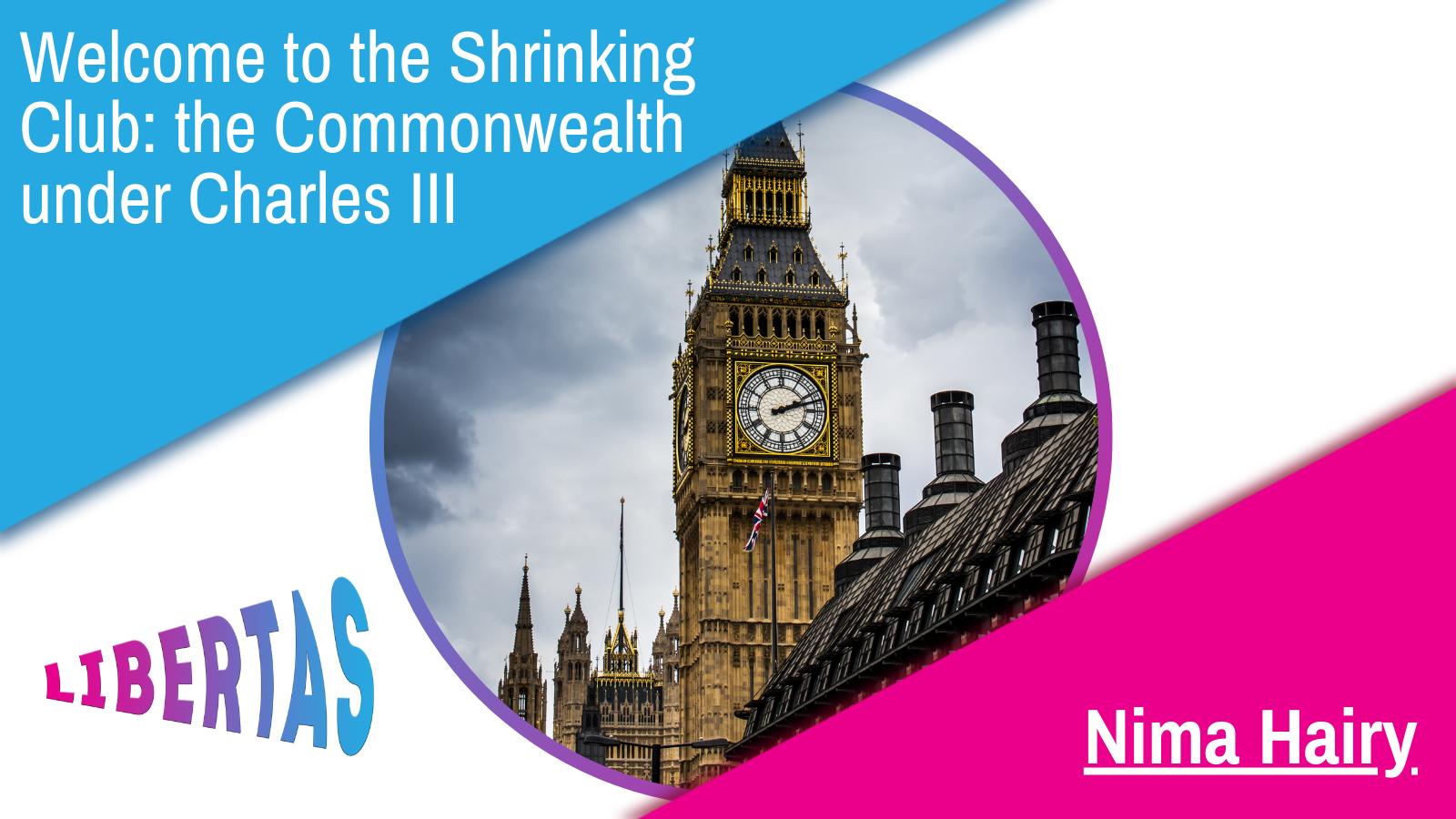 With Queen Elizabeth II’s passing, the United Kingdom’s new Head of State, Charles III, did not only inherit the British throne - it also inherited a Club. Yet the role of the head of the Commonwealth of Nations, a political association of fifty-six member states, is not supposed to be hereditary.  In reality, King Charles has the Queen’s painstaking lobbying to thank for this role. And now that he has finally inherited the role of the Head of the Commonwealth, which the Queen deeply cared for, he has to grapple with a club facing an uncertain future coupled with an existential crisis.

Of the Commonwealth’s fifty-six member states, thirty-six are Republics, fifteen are Commonwealth Realms - meaning he is the King to them -  and the remaining five members have their own Monarch. The membership is voluntary, and the majority of the members happen to be previous British territories.  Some, like Togo and Gabon, joined as recently as 2022, without ever having been under British control.

Needless to say, just as a member can voluntarily join, members can voluntarily leave at any time as well.  Since its inception, two members  - Ireland and Zimbabwe -  have outright left the Club, another has become a Republic - Barbados - and three more - Jamaica, Belize, and Australia - are seriously contemplating an exit. While the Club’s stated mission is to facilitate a network of member states that fosters international cooperation and trade links, while also promoting democracy, development, and the tackling of climate change, it is clear that some members believe that the positives do not necessarily outweigh the negatives.

The Apology not heard around the World

At the core of the argument for leaving the Commonwealth, is the colonial history of the British relationship with their countries.  What infuriates those asking for a Common-exit,  is the lack of an apology, let alone an offer of reparations from the British Head of State.  They claim that the legacy left by British colonialism is that of a country with economic and psychological trauma that informs the lack of its development.  So if the Commonwealth has as a mission the promotion of development, the logic goes, then it should by extension address the repercussions of its colonial past.  However, King Charles III has repeatedly refused to apologise or begin talks of reparations.  Nonetheless, it does not mean that the Commonwealth was not instrumental in helping tackle some structural racism around the world, as it was integral in the abolishing of Apartheid in South Africa.

The newly anointed King Charles III must tackle three issues for the Commonwealth to survive: Legitimacy of Leadership, Purpose of the Association, and reversing the Churn rate.  On the issue of the legitimacy of Leadership, the Queen already did an extraordinary job of lobbying for the King to get the role - now he must prove he is up to the task.  Charles III needs to do a charm offensive in the Commonwealth countries, and make the type of gestures that could gain the confidence of the more sceptical wing of its members.  By similarly opening up the idea of democratizing  the role - like Prince William has, and to begin making verbal and actionable amends for the Crown’s past egregious behaviors.

Once he has passed the legitimacy test, he must lead a reform of the Commonwealth and bring about a renewed purpose.  Some believe that a reform would mean putting at the forefront a legacy of the British empire and colonialism, with an honest and serious tackling of the issues of reparation and restitution.  There is a clear division, and if he wants to unite his members, he needs to take bold and severe actions.  It is only with these steps that he could reverse the tide of the membership churn rate, and leave behind a legacy of a reinforced and stronger Commonwealth.  Either way, the decisions that King Charles III will make as he takes over the leadership, will shape the trajectory of the Commonwealth, and be decisive in the relevancy of the Club for decades to come. Let’s just hope he makes the right ones.