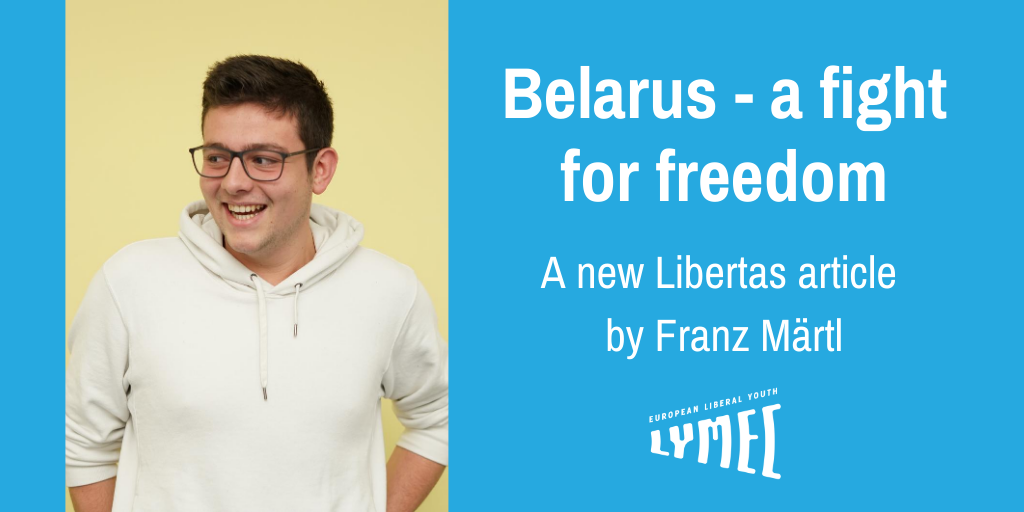 Belarus - a fight for freedom

Belarus - a fight for freedom

As European Liberals we must clearly be on the side of the demonstrators and solidarize with the democrats and fighters for human rights. Silence is not an option. It`s in our political DNA to fight for liberal values worldwide, all the more if they are threatened right in front of us. For Liberals it`s not bearable to have a dictatorship right on our front porch. Europe is a place of freedom and democracy, and as Liberals we will never take a step back from fighting for these values.

Belarus declares to be a presidential republic, reigned by President Lukashenko, who was elected for the first time in 1994. In 1996 he extended the election period from five to seven years. The referendum on the extension was denounced as a “fantastic fake” by the chief electoral officer, Victor Hanchar, who was kicked out of office afterwards.[1] In this referendum four out of seven questions were related to changing the constitution.[2]

Not only because of the referendum, Belarus is called “Europe`s last dictatorship” by western journalists.[3][4] Belarus is actually the last country in Europe to have the death penalty, even though in the Extension Referendum of 1996 Lukashenko deleted it from the constitution.[5]

Next to being the worst country for press freedom in Europe according to reporters without borders, Belarus is ranked 157th out of 180 and Belarus Democracy Index is rated the lowest in Europe. Additionally, its labelled as “not free” by Freedom House.[6]

The referendum from 1994 shows exactly how Belarus is manipulating elections. Having a closer look at the critique that was brought forward in 1996, maybe it`s an eye-opener to understand what’s happening in Belarus right now.

In 1996 only Russia and some other CIS countries were recognising the results of the referendum as reliable.[7] CIS means “Commonwealth of Independent States” and is a regional intergovernmental organization of nine members containing states like Russia, Uzbekistan, Kazakhstan, Azerbaijan, […], encouraging cooperation in economic, political and military affairs.

Critique on the referendum was brought forward by the Belarusian Helsinki Committee:

The Belarusian Helsinki Committee is a non-governmental human rights association established in 1995 in Belarus. The opposition also accused Lukashenko of practicing vote rigging. According to statements from politicians out of the opposition, 20 to 50 % of the votes counted had been manipulated.[9]

On 9th August 2020, Lukashenko was re-elected with 80,23 % of all counting votes.[10] Lukashenko’s opponent Tichanowskaja received 9,9% according to the electoral commission of Belarus. The Opposition and a huge part of the population are not accepting the outcome of the vote. According to the German “Tagesschau” independent exit-polls in Belarus showed 71% for Tichanowskaja, who`s not accepting the vote either.[11]

Until now it`s unclear how the elections have been manipulated, but taking the referendum from 1994 into consideration, it is highly probable that there were similar occurrences again.

In the night between 9th and 10th August, there was a huge demonstration for freedom, democracy and human rights in Minsk and 30 other cities. The demonstration got more and more brutal and ended in street fights between the demonstrators and state forces as the police and even the military, which cracked down on the demonstrations brutally. At the moment it`s not sure how many people have been hurt or killed.

A ROLE FOR DEMOCRATS

Only few know what sacrifices Tichanowskaja had to bear or how she got into running for office. Her husband Zichanouski announced to run for office, but the electoral commission forbade his application. Tichanowskaja had to take over and made her husband head of her campaign team, which lead to him being arrested for public commotion.[12] Amnesty International does not recognise the charge and reproaches corruption.[13] Because of not only this incident, but also because of receiving death threats, Tichanowskaja had to take her children out of Belarus. At the moment they are staying in an unknown European State. On Tuesday 11th August, Tichanowskaja herself had to leave Belarus and flee to Lithuania.[14]

As European Liberals we must clearly be on the side of the demonstrators and solidarize with the democrats and fighters for human rights. Silence is not an option. It`s in our political DNA to fight for liberal values worldwide, all the more if they are threatened right in front of us. For Liberals it`s not bearable to have a dictatorship right on our front porch. Europe is a place of freedom and democracy, and as Liberals we will never take a step back from fighting for these values.

Franz Märtl is from Germany and he is a member of JULIS (Junge Liberale) since 2017. He is currently leading the editorial office of the JuLi-Member-Magazine and he decided to join the LYMEC Libertas Editorial team recently.