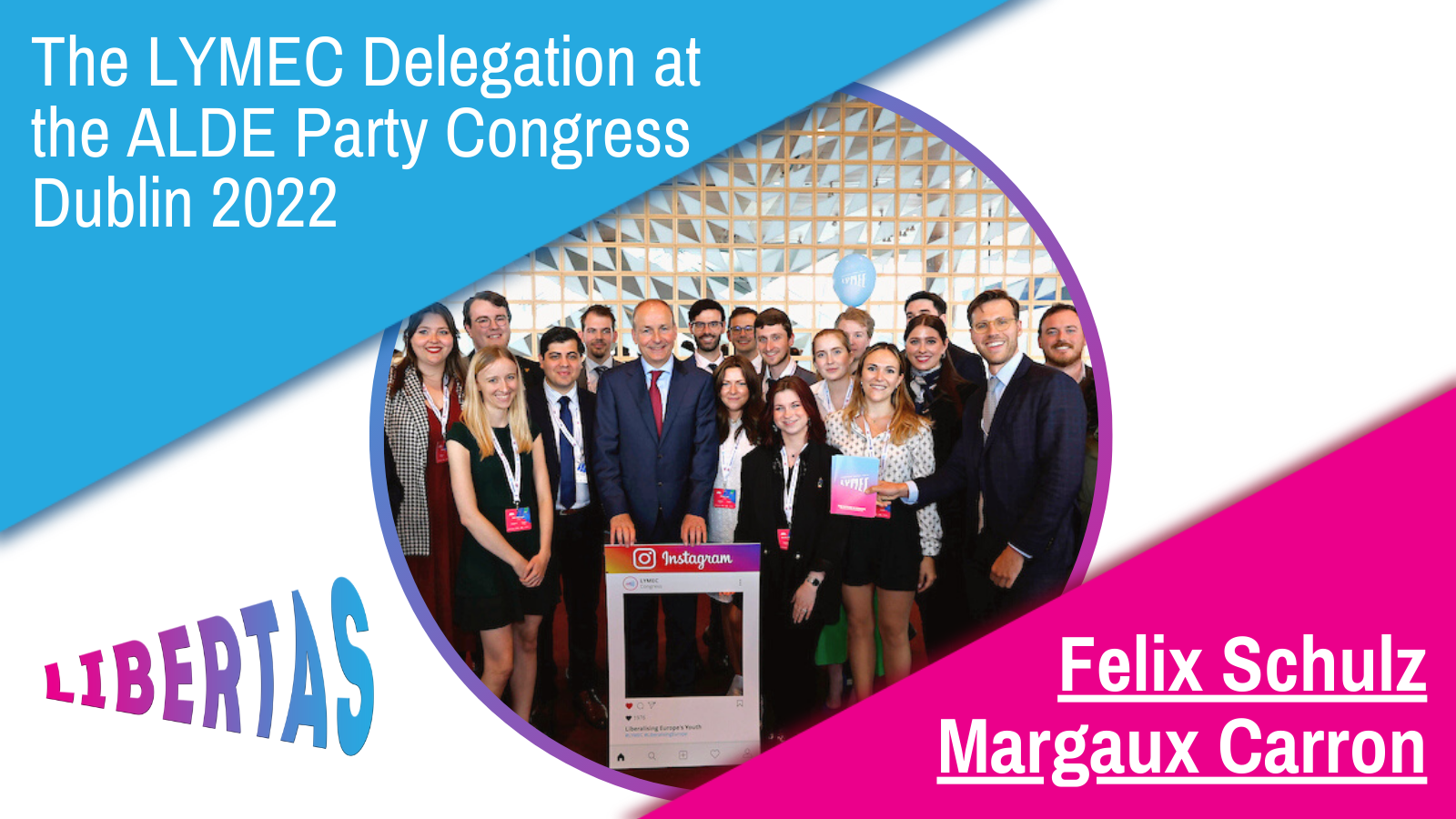 The LYMEC Delegation at the ALDE Party Congress Dublin 2022

Written by Margaux Carron, member of the Editorial team and Felix Schulx, Libertas Editor in Chief

After two years of absence, an Alliance of Liberals and Democrats for Europe (ALDE) Party Congress took place in person in Dublin. Hundreds of Liberals from all over Europe met in Dublin from the 2nd till 4th of June and elected a new board and discussed current issues. Also a delegation of the European Liberal Youth (LYMEC) was present and represented the ideas and visions of the European youth.

Everyone has been waiting for the elections of the new ALDE bureau to take place. Timmy Dooley (Fianna Fail, Ireland) and Ilhan Kyuchyuk (MRF, Bulgaria) presented themselves as Co-Presidents to the electoral congress. The duo wants to lead the ALDE Party during the upcoming European election in 2024 and establish a solid liberal base in the heart of European politics in Brussels. In the end, 82,3 percent supported their candidacy and confirmed their trust in these two liberal politicians.

Also we are happy to see that our former president, Svenja Hahn (FDP, Germany), has been elected as one of five Vice Presidents of the ALDE Party. In total 78 percent of the electoral congress supported her and her campaign. In her speech she highlighted that liberals have to shape the political discourse, while freedom and democracy continue to be threatened by autocrats and dictators. That is why our European liberal family needs to continue promoting a free and independent Europe. We strongly believe that Svenja is the right person for the job and will contribute substantially to the new board, as she already did during her time at LYMEC.

LYMEC also contributed to the political debates at the ALDE Party Congress. The Assembly overwhelmingly supported the 3 resolutions presented by the LYMEC delegation. The first resolution called for the revision of the asylum system in favor of a human-centered approach, which relieves the countries of arrival, facilitates access to work by asylum seekers and secures transparent funding. The resolution also demanded that a formal definition of Climate Refugees be acted. The second resolution emphasized the importance of mental health and access to mental healthcare. The resolution also stressed that the consequences on mental health need to be taken into account during major pandemics. Finally, the delegation defended LYMEC’s position on harm reduction drug policies, which position the use of drugs as a public health issue. This last resolution supported the path to decriminalization of the possession and consumption of drugs. The LYMEC delegation was also pleased to see the Assembly voted in favor of the Spitzenkandidaten resolution, which the delegation supported during the Congress.

In the end, the first ALDE Party Congress in person was a great success. We were shown that nothing can substitute personal interaction and sharing insights, visions and ideas. The congress was also a reminder that democratic discussions and debates should not be taken for granted and that we need to defend them continuously.

Margaux Carron (CH) has been active in politics since she's 19, when she was elected as a legislative representative of Nyon, a 20'000 inhabitants town in Switzerland. Since then she has been active in various committees of the Mother and Young party. She is currently International Officer for the Young'Green Liberals Switzerland while living in Bruxelles where she pursues her career in the field of Security and Prevention. With a university background in Psychology and Criminology, she also holds a certificate in Internation Relations and Negotations.

Felix Schulz (DE) has been a member of the FDP since 2015 and since 2020 of the Young Liberals. Currently he is working for a German liberal MP, where he focuses on transport and EU policies. At the same time he is doing a PhD in political science at the TU Darmstadt, where he is looking into the German Hydrogen Strategy. Felix studied International and European Governance at Leiden University, where he finished his Master in 2016. He is especially interested in energy policy and the path towards a carbon neutral future. Additionally, he seeks to look behind current political discussions and assess the impact on citizens of the European Union