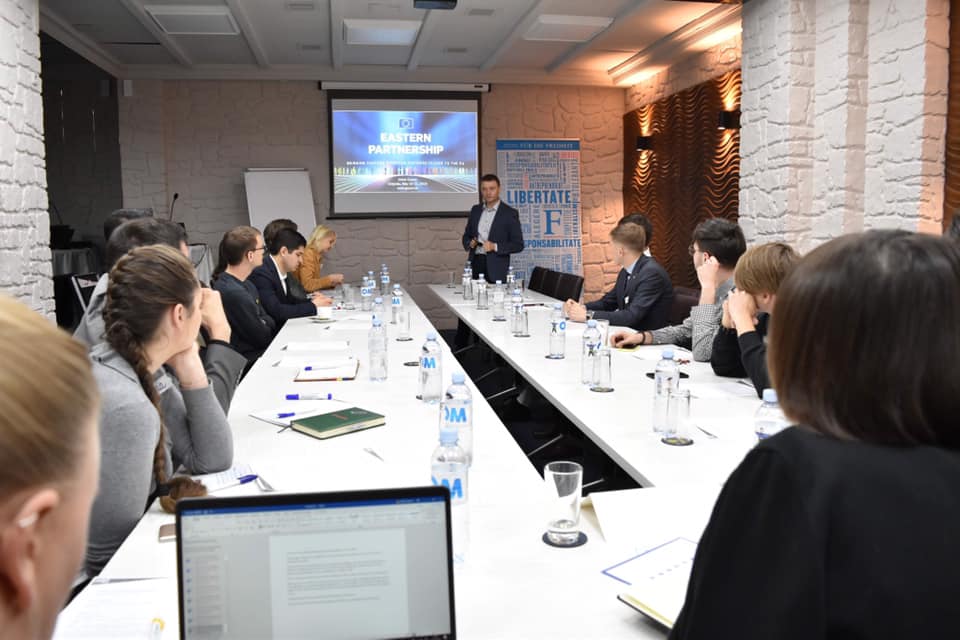 On 10th – 12th of May 2019, LYMEC along with FNF met in Chisinau, Moldova for a seminar on Eastern Partnership, as this year marks the tenth anniversary of the Programme .

During the fruitful weekend in Chisinau participants from both EaP and EU countries gathered together with FNF SEE and LYMEC to form fresh ideas on how to develop and intensify the Eastern Partnership in the following years.

The seminar started on Friday evening with Mr Victor Guzun, former ambassador of Moldova in Estonia, presenting how the partnership has been progressing over the decade. Mr Guzun began with overviewing the historical aspects behind the partnership and how it has developed to its current state. The historical brief gave also insights on the current challenges as well as potentials of the Eastern Partnership. Those insights were used by the participants in order to form new liberal ideas for the EaP during one of the workshops followed.

The event continued with a presentation on the current political situation in Moldova by the former Minister of Education and member of the Liberal Party of Moldova Ms Corina Fusu. Following the presentation, the first day of the event was concluded by encouraging participants to think of concrete proposals and liberal ideas to be presented and discussed during next day’s workshop.

On the 11th of May, the seminar started with a short recap of the first day’s sessions. Then the Secretary General of LYMEC Danica Vihinen presented the organisation’s position on policies on the EaP; a policy that was last time updated in 2016. Short after, Bureau Member of LYMEC Dan-Aria Sucuri held a seminar on energy independence and how it might affect the progress of the EaP.

After all the perspectives and historical briefs were given, it was up to the participants to use the information gathered and created a new proposal for the liberal Eastern Partnership policy. The entitative was formed by four priorities that LYMEC should focus on towards the partnership countries. The priorities were: education and acknowledgement initiatives about the EaP among LYMEC members, mother parties and other third-partners but also vice versa. Educational support of locally elected liberal Youth Leaders by encouraging them to participate in LYMEC events. Promoting open and transparent public services in EaP countries and advocate environment protection in EaP countries as a cross-cutting initiative. Seminar’s last session was held by Dorin Chirtoaca, leader of Liberal Party (Moldova) and former Mayor of Chisinau. Mr Chirtoaca provided participants with an in-depth idea of the current state-of-play of Liberalism in Moldova and the country’s foreign affairs.

At the end of two days of productive discussions and valuable insights from experts, we concluded that a prosper and successful Eastern partnership remains a priority among young liberals. While there is still a lot of work to be done, it is evident that young liberals acquire both the will and the ideas to shape a better partnership towards a stronger European integration.